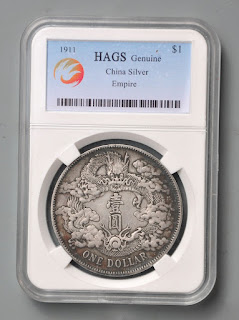 What caught my eye at first were the beautifully made fake cash coins shown in 2x2 white mylar holders. Even though it's after midnight, I can't forsake my duty to divulge the identity of yet another purveyor of ‘let's pretend we have ancient coins’ on eBay. But after I looked at this seller's whole stock, I found what amazed me even more—slabbed coins similar to the discovery disclosed in my previous post, only these slabs are even more ‘pretend’ than the others. It's almost the work of a thirteen year old who is playing at being a grown-up numismatist. Take a look at these slabs and their labelling! 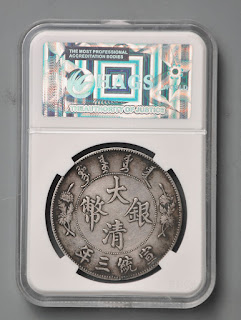 HAGS Genuine is what the front label proclaims without exactly telling us who or what HAGS stands for, or what is genuine. Is it the slab, the label, what? And the skinny strip of bar coding below—what is that? some kind of magic symbol that is supposed to take away our fear that what is slabbed might be fake? Give me a break! 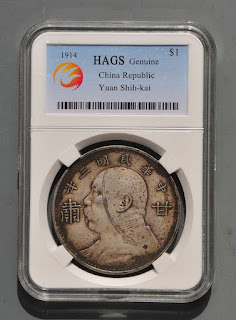 The label on the back is even more mystical. Along with its funny, circular logo, it now looks like it says HAGS & World. Then, above that, in a nice box, it proclaims, ‘The most professional accreditation bodies.’ Whoopee! I am so impressed! But then, as a final mark of authenticity, at the bottom of the label is ‘The Authority of Justice.’ 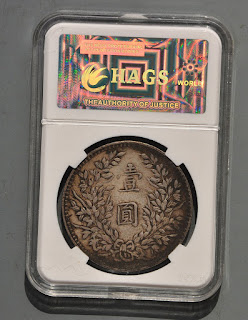 And I thought we had hit the gravelly bottom of the Yangtze when we ran into China-Changbao.com! At least they looked like they were trying to deceive. HAGS, on the other hand, doesn't even try to deceive, or else they think that most eBayers are as dumb as stumps.

I am so tired of this. Now, as to the fake cash coins. I have to dedicate a post specially to the fake cash coins of this new arrival, junguoxu2011. He's done a far better job (from his point of view, I'm sure) at convincing us of the authenticity of his wares.
Posted by Norman F. Gorny at 1:07 AM