It really is time to return to a determined hunt for these dealers of fake coins, but it's like, you don't have to look far. As soon as I open eBay and it goes to my default view "Coins: World" and Sort: "Price + Shipping: lowest first" I am usually face to face with a fake coin. That's exactly what happened this afternoon. The guest of honor? anhuijieshou2013.

What's odd about this dealer is, I think this seller is trying 'something new' that is not really in his line. I think that his original inventory may not be coins at all, but women's clothes. Why? In better than average Chenglish, after describing the item for sale as "China Ancient Copper coin Diameter: 30mm", the description continues, "If you feel the size is a bit small, it's normal. The underwear is stretchable so the size looks smaller but it actually fits you well."

This dealer currently has listed 33 'coins' for sale, a mix of struck coppers and imitations of cash coins or charms in cash coin format, along with one 'tally' (a sort of holed rectangular copper tablet used in ancient times for financial purposes). After my last post, I can see that if I show every coin that a dealer is selling, I could be here for hours. Rule of thumb, if even one coin is a guaranteed fake (that is, from our point of view, not from a Chinese merchant's) it's best to avoid all his offerings, unless you (like me) are on the look out for some interesting copies of rare coins, or fantasy pieces that you can put on your coffee table as conversation starters.

I wonder how the seller's handle is written in Chinese. Ānhuī 安徽 is the name of a province. Jieshou could be written in a n umber of ways, but one of them, Jiěshǒu 解手 means 'to relieve oneself.'

As for the coins. Here's a few of the struck coinage types, fake because these are not coins that could be sold on eBay starting at $0.01. The volume and variety of struck Chinese copies and fantasies is bewildering. Modern technology and Chinese ingenuity have flooded the market with worthless scrap metal in the shape of historic coins. 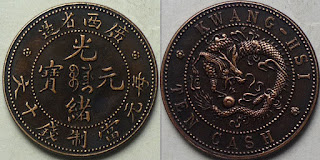 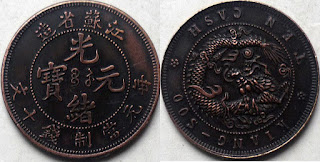 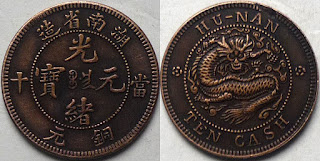 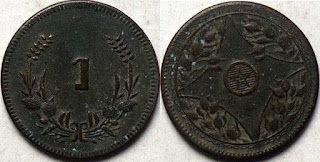 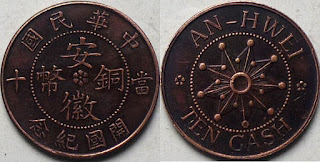 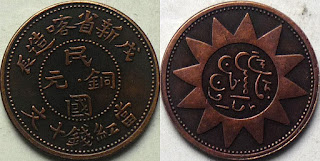 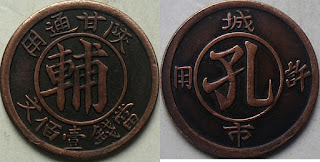 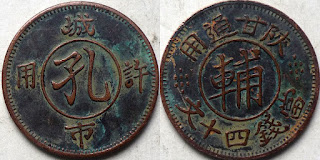 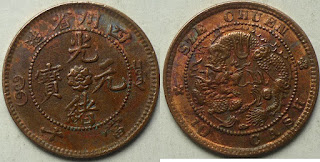 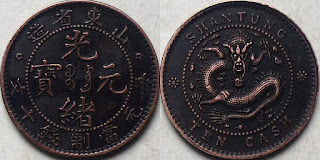 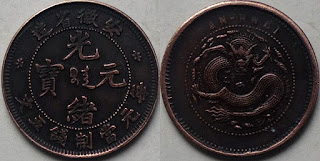 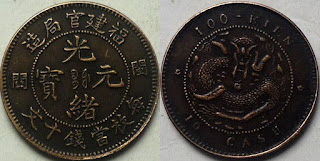 Group 4: Fake 天下太平 Tiānxià Tàipíng Charms
A series of charms was issued during the Qing dynasty with this inscription on one side, which means essentially 'Peace and Harmony Everywhere' and on the other side the usual imperial inscription, the emperor's reign title and 通寶 Tōng Bǎo, 'circulating treasure'.
Authentic charms of this type, as issued, did not have any carving in the rims. In fact, no cash coins or cash type charms are ever cast with carvings in the rims. (A few types have characters cast into the rims, but this looks different.) All carvings are added later. The fake charms shown below cannot be authentic for reasons other than the carvings. Calligraphy and module are just not correct on these. Also, an important aspect to notice about cash coins is, the edges are always cast square. Any cash coin with excessively rounded edges on both faces is highly suspect. This is the most common sign that a large size cash coin is a modern fake. 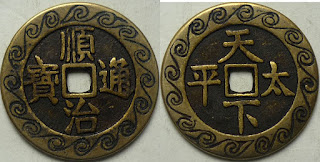 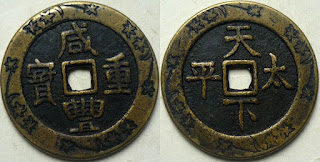 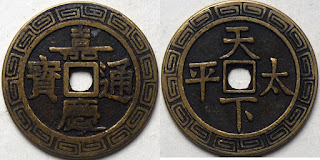 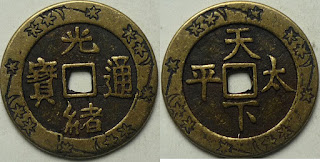 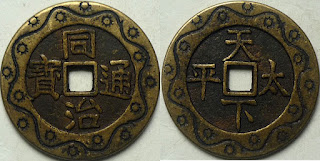 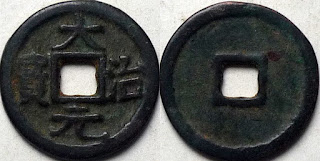 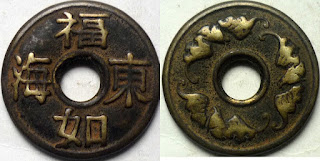 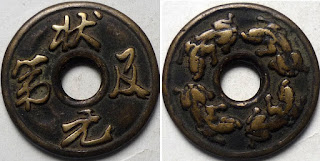 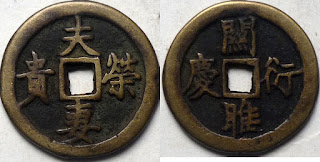 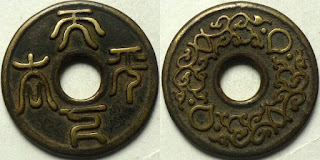 Conclusions
My conclusion about this seller is that his fakes are not really good enough to collect as well-made copies of rare coins, and his fantasy pieces are pretty pedestrian. Perhaps if he normally sells women's underthings, some of the ladies might enjoy having one or two of these charms on their dressing table or in a jewel box, but that's about all they're worth from a collectors point of view.
Posted by Norman F. Gorny at 6:45 PM