Hang on to your seats! Fake coins certified by fake Certification Companies!

Poor, innocent me, a small town Illinois boy living out on the edge of a cliff on the West Coast! Good thing I started studying foreign languages at the age of eight. Chinese, Russian and Hebrew I took up around age thirteen. Not the Russian, but the Chinese and Hebrew and a few others I've never stopped learning. A lot of it has to do with my insatiable interest in foreign cultures and their coins.

So even though I started out life as a Tom Sawyer in the 1950's, I learned my stuff, and I'm here to make sure no one hoodwinks any of you out there who might share my childhood through adulthood passion—foreign coins! After putting together my last post, I lingered at eBay a minute or two, and then came across the following boldfaced assault on numismatic integrity.

A company in China, with a webpage, www.china-changbao.com, has set itself up as a slabbed coin certifier of Chinese coins. The first one that met my eyes was this 'dollar', called by the seller a "1929 China Silver Coin, Memento Sun Yat Sen Silver Coin $1". 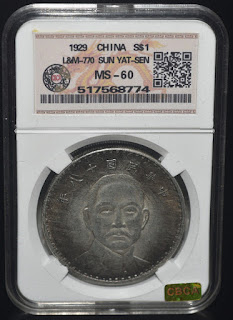 The coin is in a slab, a very official looking one, complete with serial numbers and barcode, and on the back of the slab, barely visible at the top, is the web address that I referenced above. The coin is graded at MS-60, that is, Mint State 60. Looking at the piece, it's obvious from the photograph that both sides of the coin have been harshly, abrasively cleaned. There are scratches all over the piece. The other point is that this is not a 'Memento Dollar' but instead (if my memory serves me right) an example or a copy of a rare 'Junk Dollar' pattern designed by an Italian designer. 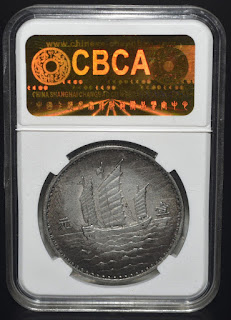 It's quite obvious that some Chinese are utterly contemptuous of Western standards in numismatics, not only claiming qualification to grade coins, but even asserting (by silence) the coin's authenticity. It was bad enough in the old days when one had to watch out for the occasional cagey or dishonest coin dealer. Now we have to watch out for fake grading services. I suppose this is not new. It's just I have not had to deal with it before.

Future generations are really going to have a field day trying to separate fakes from authentic coins. In the case of better made fakes, some are so exact that for all practical purposes they are indistinguishable. Not, however, with this piece. Wherever it goes from that starting bid of US $0.01, I hope only that the fraud is discovered quickly and dispensed with.
Posted by Norman F. Gorny at 6:56 PM