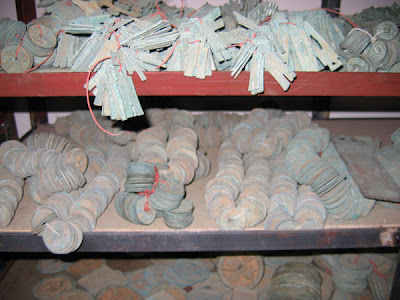 Everyone who collects Chinese cash coins and knows about eBay also knows that you can buy cash coins at auction on that site.
For the past nearly ten years, eBay has been the source of most of my acquisitions in cash coins, both of bulk quantities, and of smaller groups and individual pieces. This is not, however, where I started out, and I also do acquire new material from non-eBay sources even now. The Da Guan value-10 cash shown below (from my reference collection) is authentic. 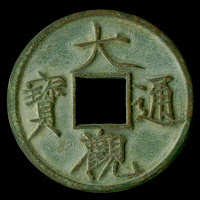 My original domestic source of oriental cash coins as well as my first books about them was Scott Semans, originally of Ohio, then New Orleans, and now in the Seattle area. He perhaps no longer deals in cash as he once did, though he still is a very important source of literature on the series. The current non-eBay, domestic (U.S.) sources of genuine oriental cash coins are Frank Robinson of Albany, New York, and Anything Anywhere, formerly of Oregon (that’s where I met Bob Reis) and now for many years of Raleigh, North Carolina.

Not everyone who collects Chinese cash coins and knows about eBay also knows that a majority percentage of what is sold as Chinese cash, and as modern struck Chinese, on eBay is fake.

What do I mean by fake?
A coin that is made at the present day or within the very recent past in conscious imitation of an authentic coin. Also, a coin that is knowingly sold as “genuine” when the dealer in fact knows it is not. 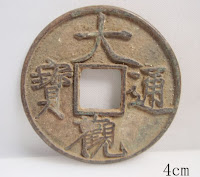 Curiously, you will notice that the most successful and plentiful dealers of Chinese fakes are eBay sellers with 100% satisfaction rates, as well as other “awards” granted by eBay. Obviously, on eBay’s side, they must have found a gigantic loop-hole for allowing this trafficking in false coins to go on. Perhaps it’s in the hazy definition of “genuine”. A fake Chinese cash coin is a genuine article of what it is, a cash coin to all appearances, sometimes even cast with the same traditional techniques as the originals. The Da Guan value-10 coin shown above is an eBay fake.

But let’s get down to brass tacks. No official cash coins have been issued in China since 1912, or in Viet Nam since the mid-1950’s at the latest. A few genuine cash coin types have been machine struck, but all the rest have been cast in molds and hand-finished by filing and polishing. The majority of the cash coins on auction or for sale (Buy It Now) on eBay are fakes. They don’t qualify as genuine cash coins at all.
The souvenir card shown below of "Chinese Old Coins" contains only fakes of Qing Dynasty cash.

There are a lot of collectors out there who don’t know their material, and the same is true of many eBay dealers. Chinese and other oriental cash are a completely different genre from western, machine-made coinage. You have to handle the genuine item repeatedly and broadly before you can judge whether a coin is genuine or not. You also need to invest in the literature, the coin catalogs, that cover the series. A seasoned collector of cash coins can easily spot a fake on eBay, even from the photograph. 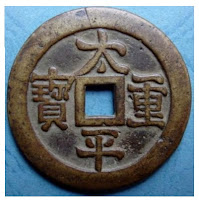 The fakes are just that dumb, but their makers are assuming that we are also just that dumb, and apparently they’re correct. There’s more than enough ignorant collectors and connoisseurs of ancient coins (not just the cash series) that the making and selling of fakes to this group is a sustainable industry.

The Tai Ping coin shown above is a modern fantasy cash.
There are also some fakes that are so deceptive that they fool even reputable dealers and collectors. The only safeguard anyone has is to buy from a dealer who openly guarantees the authenticity of everything he sells. If you discover that a coin is a fake, he will take it back and refund your money. The problem is, the dealers in fakes usually make the same guarantee, because they are (unfortunately) correct in their assumption that if a person buys from them, he is an ignoramus who doesn’t know a real coin from a fake, and possibly never will.
Posted by Norman F. Gorny at 7:00 PM