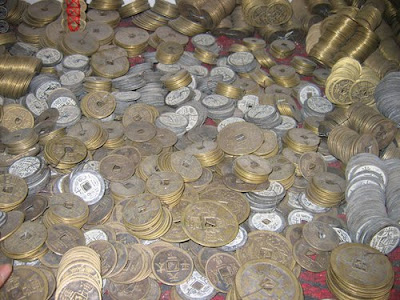 Don't think that cash coins are being counterfeited?
Take a closer look...

I have been rather loose in saying that 99% of the Chinese coins being sold on eBay are fakes, and I knew that it couldn’t be so. Perhaps 99% are fakes and stupid made-for-collectors junk, and modern bullion pieces, but I knew my saying 99% are fakes simply couldn’t be accurate.

Although I collect Chinese and other Asian struck coinages, my main interest has always been Chinese cash coins, so I decided to do an analysis of this morning’s auctions.

I copied every one of the 1,470 auctions that were listed on eBay USA this morning in the category: Coins & Paper Money > Coins: Ancient > China into an Excel spreadsheet. Then, with the eBay window open, and sorting from ending soonest to listed most recently (the order in which I copied the auctions), I reviewed every auction, and entered in my spreadsheet an ‘x’ in Real or Fake and then in some cases in NA (not applicable, e.g., digital scales, books, etc.), in NC (coins, but not in cash coin format), or in Dumb (a category of real coin where the attribution was incorrect or just ignorant). In some cases, into the dumb category went an auction that looked like a willful attempt to deceive or mislead, using a real coin in a wrong way.

These statistics were derived from an analysis of today’s eBay listings at about 8 a.m. PST, essentially a snapshot of one eBay auction category for analysis.

Of course, the auction went on without me, and the statistics are what they are, an analysis of just one random moment in time. Nonetheless they tell a lot.
Posted by Norman F. Gorny at 6:00 PM