Buy the Book Before You Buy the Coin

This is by far one of the best and truest sayings in numismatics. Nothing is worse than trying to collect coins without knowing anything about them. Though we no longer use maps on road trips because our dashboard GPS devices point the way, it’s a 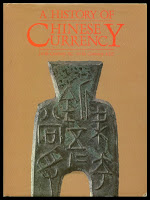 different story with navigating through eBay’s numismatic minefields. You need to learn some basics. The following are the books I have used or am still using. I will list the English language ones first, then those in Asian languages.

A History of Chinese Currency – An interesting and high illustrated review of the Chinese monetary system with lots of good color photos of real cash coins. Not a catalog, but very useful to gain a familiarity with what genuine Chinese coins look like.

Cast Coinage of Korea, Mandel – The standard, if you collect yop chon (Korean cash), you must have this catalog if you are to make any sense out of the series. This catalog also contains an extensive glossary of Chinese/Korean numismatically related terms.

Chinese Cash, Cresswell
A curious little book that in spite of its primitive simplicity is still worth having. It covers the whole scope of Chinese cash coins in 63 pages with about 20 more of coin drawings (comically crude) and other lists of information. I’m glad I kept my copy. It was my first cash catalog, bought for 75 cents circa 1970.

Chinese Currency, Schjöth – S —The standard by default for many years, despite its numerous shortcomings. Uses line drawings instead of rubbings, has useful historical notes, covers Chinese cash with some coverage of Korean and Annamese coins, as well as charms. It has been supposedly replaced by Hartill's catalog.

Ch’ing Cash until 1735, Burger – Extremely informative for the history of Chinese cash production, as well as for English translations of many Chinese numismatic terms, includes gigantic foldout charts of rubbings to show the attribution of varieties by year. Disputed by some authorities, the year-by-year attribution makes sense to me, and I have my collection organized by Burger's charts.

Chronology of Kai Yuan Tung Bao, Roger Doo – This book contains the latest information in English as to the historical arrangement of the series of cash coins called Kai Yuan, of the Tang dynasty, as well as providing a reference catalog. I prefer to use the Chinese language variety catalog described below as a variety reference rather than this book. 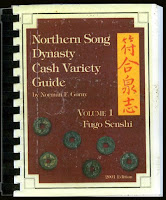 Northern Song Dynasty Cash Variety Guide, Gorny – NSDCVG – This is my main reference for collecting Northern Song Dynasty cash by variety. This catalog covers the Southern Song coinage before the introduction of year numbers, as well as the common cash coins of Western Xia and Jin dynasties. Very little coverage of iron coins. To be revised and republished in 2010 by the author.
Standard Catalog of World Coins (Krause Mishler, 1800-1900, 1900-2000) – KM – Having a Krause world coin catalog that covers the cash series is very helpful, and it doesn't matter if it is new or out of date, since the valuations given are guesswork at best. I use volume 1 of the Deluxe Library Edition of 1986.

北宋钱币 Bei Song Qian Bi (Northern Song Cash, 2 vols), He & Hou – Volume 1 covers an overview of Northern Song coinage, volume 2 is the actual catalog. Not as good as the 北宋铜钱 Bei Song Tong Qian described below, but interesting to use as an extra resource when collecting Northern Song coins.

北宋铜钱 Bei Song Tong Qian (Northern Song Copper Cash) – BSTQ – An excellent variety catalog of Northern Song cash, in Chinese but easy to follow if you use the NSDCVG described above. More or fewer varieties than in other catalogs, demonstrating the point that the definitive variety catalog has not yet appeared.

大明泉谱 Da Ming Quan Pu (Ming Dynasty Variety Catalog) – DMQP – Another excellent variety catalog from mainland China, in Chinese, but still very easy to use if you know numismatic Chinese. I use this reference to catalog my Ming Dynasty collection. See also this update.

古泉大全 Kosen Daizen (Northern Song Cash, volume 3), Imai Teikichi – KD – The original Japanese variety catalog for all types of Northern and Southern Song Dynasty cash coins, but very weak on iron, Japanese text. The NSDCVG is loosely an English translation and presentation of the material given in this catalog. Useful for varieties of minor dynasties of the same period.

中国古銭目录 Zhong Guo Gu Qian Mu Lu (Chinese Cash, 3 vols), Hua Guangpu – HGP – The latest editions are in 4 volumes, but I use the 3 volume set. Chinese text, and no numbering system, but can be used to reference coins to a page and position on the page, as was formerly done with the DFB catalog. Especially helpful for Qing Dynasty coins.

Other Chinese Cash References
Chinese Cash: Identification and Price Guide, Jen – This is NOT a good catalog to use, despite the author’s best intentions.

Cast Chinese Coins, Hartill – I still don’t own a copy and so am not using it, for no other reason than I am not going to live long enough to re-catalog all my collections by his numbers. The Schjöth catalog was my reference for my entire collection until I started using variety catalogs from China. For a beginning collector or student of Chinese cash, it seems that Hartill’s catalog is here to stay. If you collect the entire series of Chinese cash coins, it's probably a good idea to get one.
Resources
You can find these catalogs all over the internet. I recommend you buy them from Scott Semans who keeps a large stock of all kinds of numismatic books, including Japanese and Chinese language publications. The newer Chinese language catalogs are available on eBay from xiangxiangkafeizha ( 1783). If you have any trouble finding books, contact me, and I will try to assist you.
Posted by Norman F. Gorny at 4:00 PM