This seller of authentic fakes (yes, I know, it's an oxymoron) has a rather pedestrian selection, things we've seen before, both cash coins and charms, and copies of struck coins, both fantasies and fakes of real coins. There's nothing here to write home about.

The company is based in Chengdu, Sichuan province, and I have been told that two provinces, at least, excel in the manufacture of fakes: Sichuan and Shandong. Perhaps, in future, if I can gather enough specimens of known manufacturers, I can have a contest among them to judge whose fakes are the most authentic and well-made.

I'd love to actually visit one of the places that makes the cash coin fakes in the traditional way. With the coming of the Republic, cash coin production ceased, and there can't be anyone still alive who was a furnace worker from those days. Perhaps the methodology is well-documented in China.

Among the fakes out there I have seen every kind—struck cash with fake granular fields (usually raised polka dots), cast coins very poorly made by using a real coin as the 母钱 mǔ qián or mother cash, cast coins made using originals but more carefully, and cast coins which look as though a new 母钱 mǔ qián was used, possibly made by CNC machining. (I used to be a machinist and ran a Haas CNC mill making aluminum machinery parts, so I know what I'm talking about. See the photo at the end of this post!)

These last can be works of art. I have a few iron specimens in my collection of fantasy reign titles but in the most exquisite calligraphy, 草书 cǎo shū or Grass script, for example. Take a look.

Examples of well-made fantasies in my ‘black museum’ collection

Of course, no such coin in any metal could have been produced in the Five Dynasties Period. Both the module and the calligraphy are wrong. Still, it's a beautiful piece.

Both these ‘coins’ were described by the seller as ‘Iron Mother Cash’. The first is 37mm in diameter, and the second is 40mm, both impressive pieces, and very well-made.

Remember, the three examples given above are NOT from the seller we are outing in this post. They are not from hmhm7004. I cannot now remember the seller I bought them from, but I did record what I paid for each. The first cost me USD $2.50, and the other two cost me USD $1 each. I hope I don't have to tell you that this was an incredible bargain.

Fakes for sale today at hmhm7004's auction on eBay

I am not going to comment on why they are fakes. If anyone has a question, you can email me at normanfgorny@mail.com, or you may leave a comment. I am going to limit myself to only ten pieces from this seller's auction. As far as I can tell, nothing is authentic, everything is modern-made. I will show you the best. 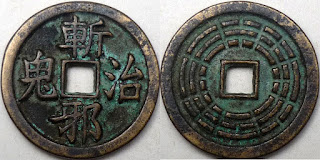 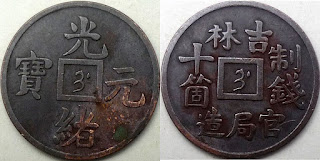 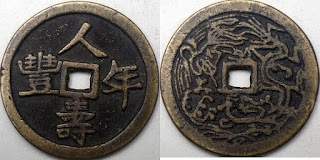 Well, that's all I have time for tonight. I am still amazed at the industry that is going on right under our noses. At least none of today's fakes are deceptive, unless, of course, you're a newby to numismatics. If you are, please note: Caveat Emptor — that's Latin for Let the Buyer Beware!